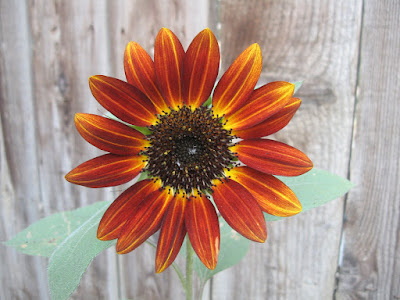 No sunflowers as of yet, but I have been looking for this picture for days. I finally found it. Can you believe all of the water and all of those pictures of the flooding going on in California. This morning Ron and I were watching the L.A. River in flood stage and in our lifetime we have never even seen water in it before. I told Ron, " When I was a little girl and we would go to L.A. I would ask my Dad why they had such a big river with nothing in it." So to see it overflowing is just plain scary.

We worked about four hours cutting limbs and just getting all of the limbs cut back and I was the limb hauler.
Ron was the chain saw guy. Today we are working on this part of the fence.

It looks like this pretty much every where you look. Ron was able to get to this before it started raining again. We have rain in the forecast until Wednesday. If we don't get to it today, by next weekend it will be as tall as the fence. I did get 20,000 steps yesterday so I was pretty happy with that since it has been my goal since I got that fitbit. I also got my badge for walking 250 miles.

While Ron was weed eating on the other side of the fence, I was pulling out stinging nettles out of the garden. Our little kitchen garden is what we are calling it this year. He then got the tractor and used that to break up the soil. We had rain all night so we have standing water in the yard and everything got sopping wet. 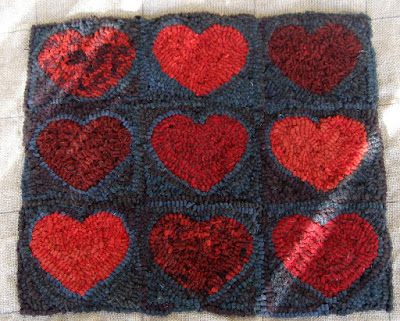 I did get this little mat hooked. It is a pattern from a book by Polly Minick. Next I will bind it. I have a new rug on my frame and hopefully I will get my wool pulled for this next rug. 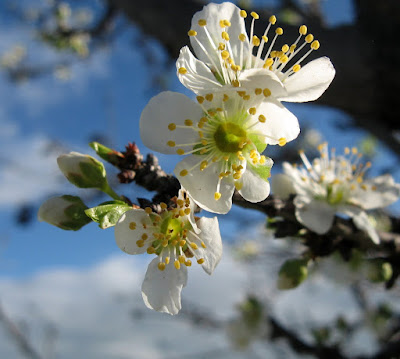 Every time I look at the forecast they have added more days of rain. This storm hitting today is another atmospheric river. Another one lined up all the way to Hawaii. It just boggles my mind. We have 48 roads closed or washed out or something. Isn't that crazy? It rained all night. It has been so many years since we have had rain like this.

We had wind and we had this tree that I thought was going to fall over. Ron and Peter got out there with a chain and this last windstorm it kept the tree up. I am afraid it could fall on my chicken coop. The wind was so crazy on Friday and Saturday but it stood strong. Like us don't you think, we sometimes need someone to come along side and give us a bit of strength to get us through the storms. 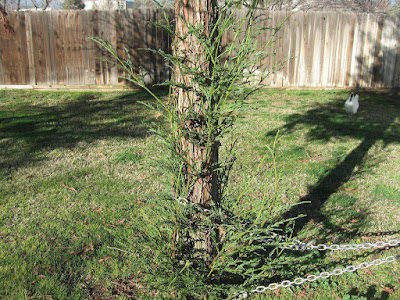 I had to show you this picture because of my little photo bomber. I didn't know he was watching me or that I had got this until I was looking at my pictures later.

I hope you have a very nice day.

'When we were in the woods beyond Gowbarrow Park, we saw a few daffodils close to the water side. We fancied that the lake had floated the seed ashore and that the little colony had so sprung up. But as we went along there were more and more and at last under the boughs of the trees, we saw that there was a long belt of them along the shore, about the breadth of a country turnpike road.
I never saw daffodils so beautiful they grew among the mossy stones about and about them, some rested their heads upon these stones as on a pillow for weariness and the rest tossed and reeled and danced and seemed as if they verily laughed with the wind that blew upon them over the lake, they looked so gay ever dancing ever changing.

This wind blew directly over the lake to them. There was here and there a little knot and a few stragglers a few yards higher up but they were so few as not to disturb the simplicity and unity and life of that one busy highway. We rested again and again. The Bays were stormy, and we heard the waves at different distances and in the middle of the water like the sea'.

Dorothy Wordsworth, The Grasmere Journal - Thursday 15 April 1802.
Posted by Farm Girl at 9:25 AM

20,000 steps??? You go girl. I've never gotten that many. In fact, I rarely make 10,000. I can't imagine how few steps I took daily before I got this Fitbit and make myself move!
Sweet little heart mat.
It's either feast or famine for you Californians. I know you were desperate for rain, but now??? Hopefully the rains will subside for a bit, but not for another 5 years.
xoxo
Lauren

Wow, what a difference in the tree you trimmed up! Everything looks so tidy. The rains you are getting are astounding. I'm glad for you, but hope it doesn't turn into an overflow of rain.

Lovely hearty rug! Congrats on all those steps! You rock!

Love your heart mat, you worked really hard trimming trees and yes that's a lot of steps.
I hope you get that happy medium with rain soon
Cathy

I see Ron is wise to trim those tree limbs. The roof edges all got rotten because of overhanging branches on our little hedge. The wood is all falling apart.

I love your little heart rug. You did a great job on it. I hope that the rain slows down and that things will return back to normal for you and that you don't get flooded.
Things will grow like crazy.
Hugs,
Julia

I just can't get it right, lol. I mean to say, "because of overhanging branches on our little shed".

You guys do so much work! I clipped off about ten branches . . . off of a rose bush😂 Your place looks beautiful!
I can't believe your storms. I pray you remain safe.
Your heart mat is super wonderful! Well done.
We walked at the mall and then I went to the Denver Botanic Gardens with Jeff, Christie, James and Noah. It was a free day so super crowded! The upside is I'm at 12,700 steps. Think of all the sitting and knitting I missed!😂
Way to go getting 20,000 steps! You're awesome!
Your cute chicken photo bomber is funny!

oh kim, i thought you messed up your before and after - they were so completely different. i thought, awww she got confused with her pictures. silly me, i'm the one who is confused!!

love the rug and seeing a daffodil, i am ready for spring!!!

Stay dry! Sounds like it is either feast or famine. You spring cleanup looks great. That is one of my favorite poems.

You surely got a lot done! You can cozy up all satisfied and rewarded during the next downpour.

The rainiest town in our county just recorded 82+" of precipitation to date! My town has got half that, but it's a lot more than usual.

Everything is so pretty! When we cut limbs, I am the hauler and get loads of exercise. I guess we need to cut limbs every day. LOL I have a chainsaw on a stick that I LOVE to use. I have to don a hard hat though because the first time I used it I dropped a limb on my head. OUCH. Love the mat and your photo bomber!

Great job with all your projects!

Oh my goodness...it's still raining?!! It seems like it's feast or famine. Having no control over the weather is such a tangible reminder of who is in control.
I can't wait to see your sunflowers, they're always so cheery! :)

I bet you sleep so well at night! That's a lot of steps! Ahhh...feast or famine there, eh? We have had bad flooding in several parts of the state as we had record high temps causing a quick thaw and melt...but, it was short lived. People are still trying to get water out of their homes while we are bracing for a major winter storm - 12- 18" of snow...with ice first. It just started here about 30 minutes ago... And terrible winds again. I'm so over this! I love that excerpt from the diary...I will have to look that up and read more!! Thanks for sharing.... Smiles & Hugs ~ Robin (Sweet photo bomber!)

PS...I love your little heart mat. What a wonderful mix of colors and textures....