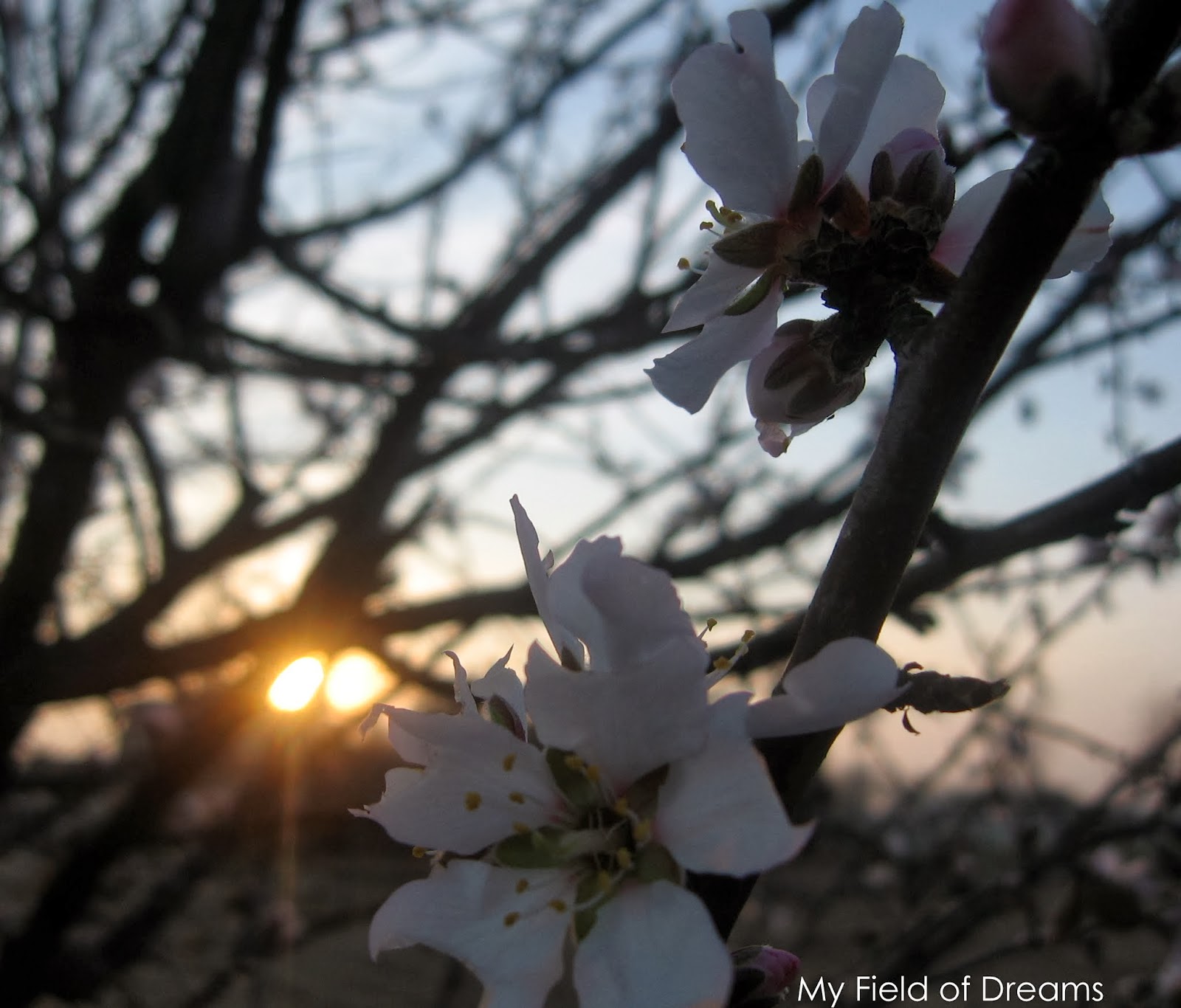 I keep seeing all of these pictures of the snow, and my goodness, I thought February was bad but March just seems to break as many snow records, but I do see that next week the whole U.S. seems to have a nice weather pattern coming. Then I won't feel so guilty of posting pictures of spring. You know I do feel really guilty right? Just so you know, because the next few pictures are what I would call just not nice at all.

As I mentioned, I have a household of sick people. My cures when people are sick are, " Go sit out in the sun, drink lots of water, and eat chicken soup, and this drink I make up for them."

The drink is this:
Take the juice of one blood orange, one regular orange, and a lemon. Put it in a cup, add boiling water and a teaspoon of honey. Drink it all up and can be repeated when ever you feel like it.
The other thing is I think because strawberries are high in vitamin C it is good to have them. I was out running errands and I went by this man selling flats of strawberries by the side of the road.  I knew they would be so expensive, but with sick kids I knew it would be worth it. 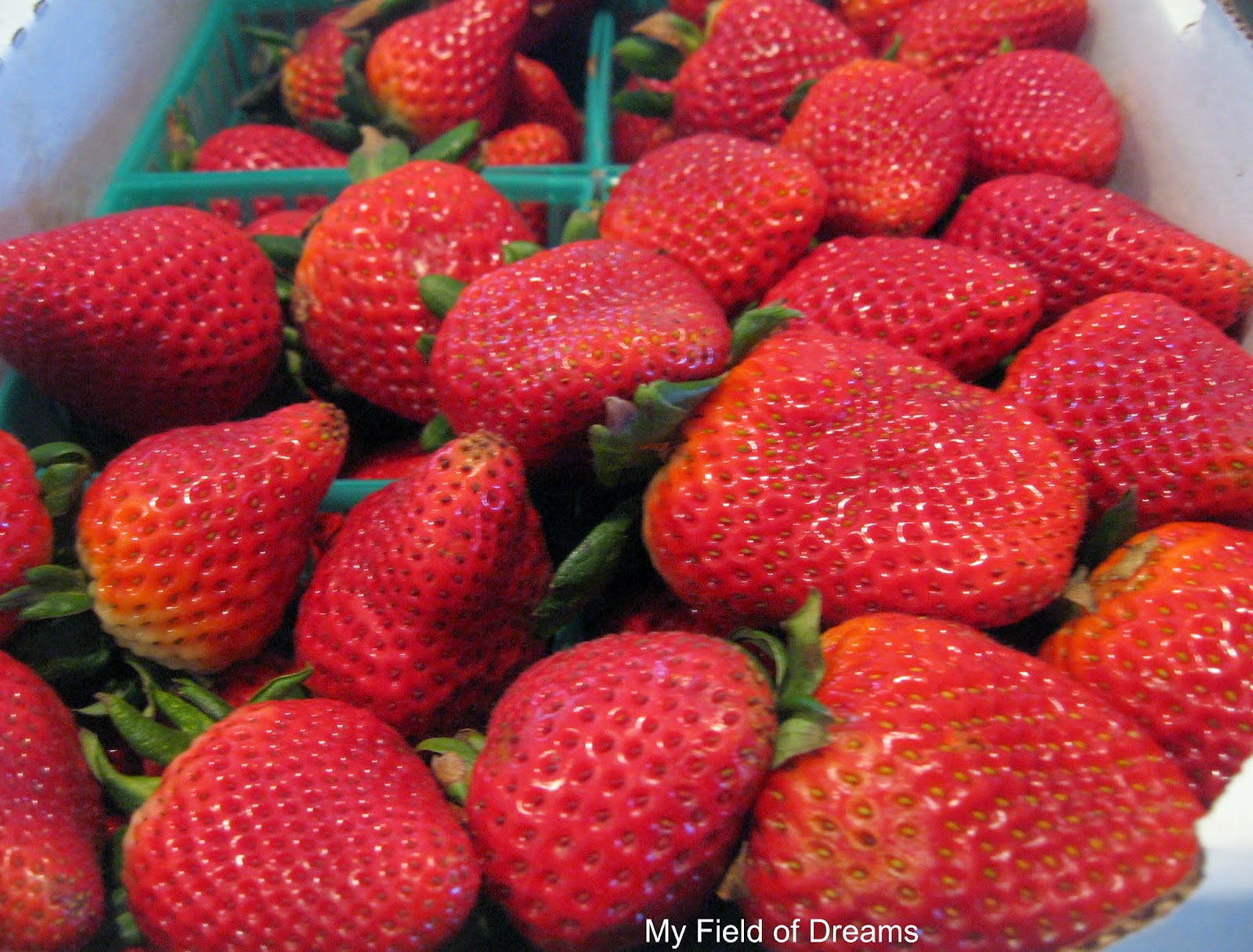 So I stopped. They were lovely. Oh so worth it. I came in the door and the boys started eating strawberries
and eating and by the evening, there was only one basket left which was gone by the next morning. 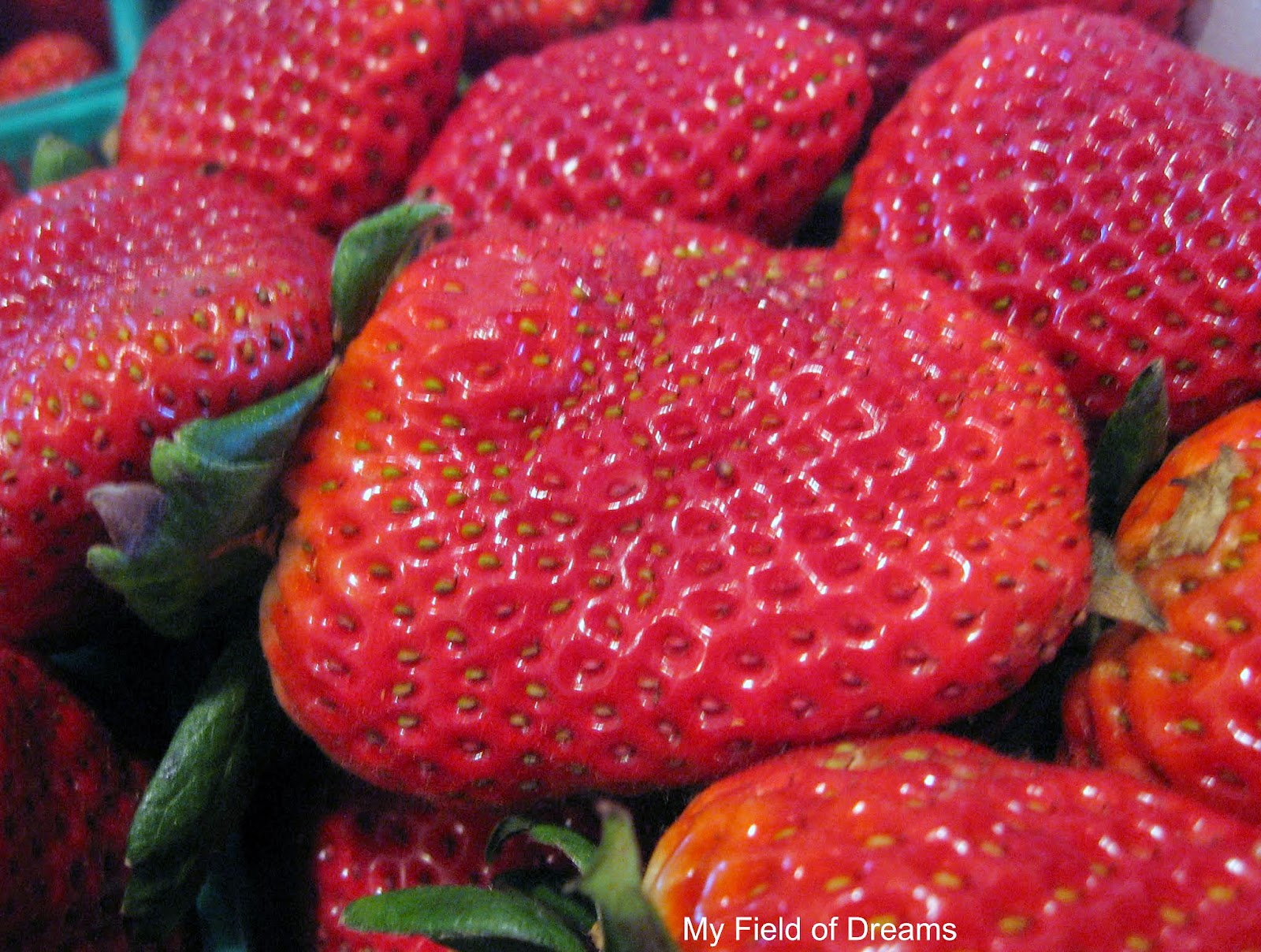 Early strawberries don't have good flavor this early but these were lovely. My grand children will all here this weekend and next week I will be returning I know they will love these strawberries.  I am so out of jam now, I know where I will be going once the price comes down, I do hope it does. 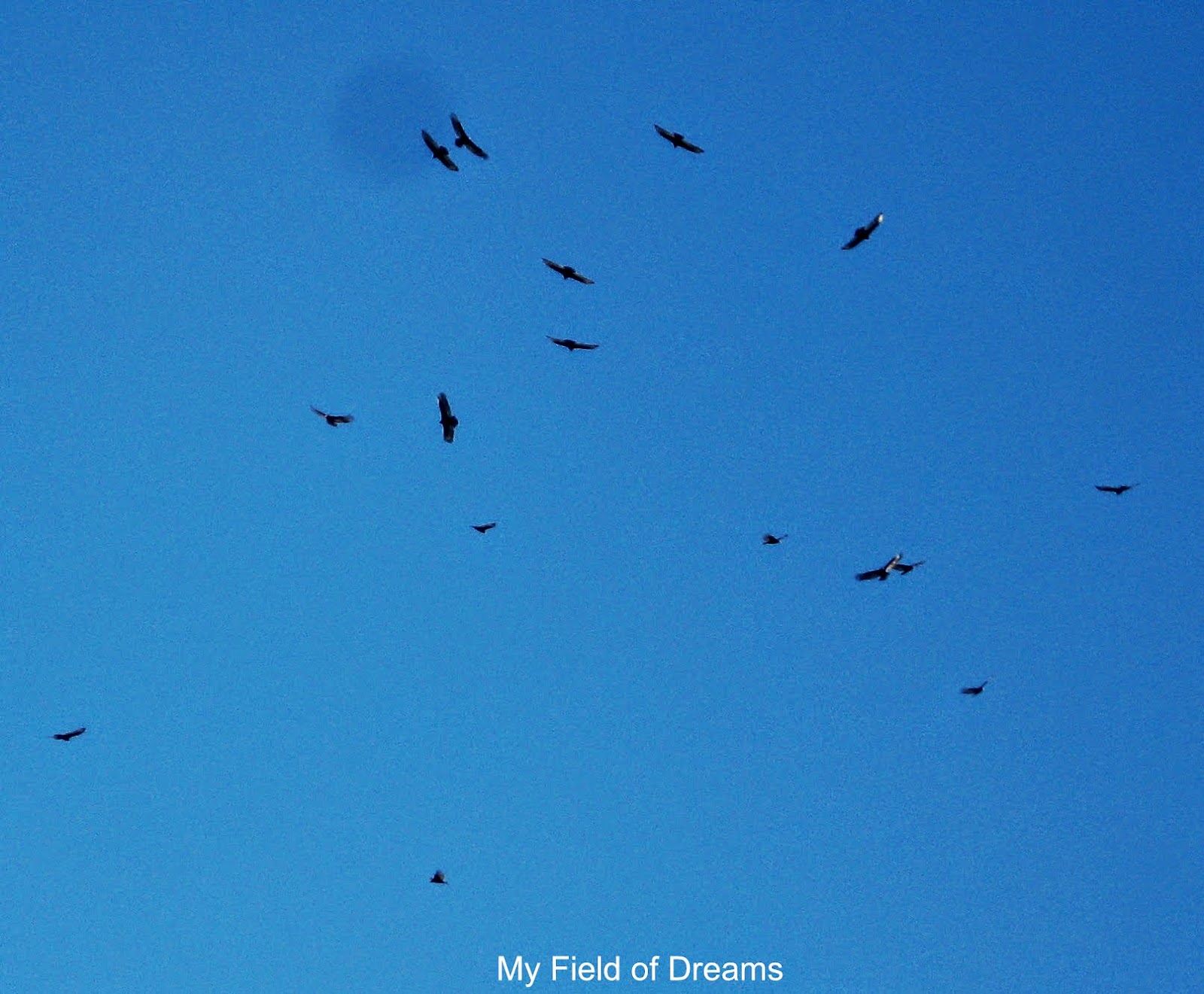 I know this isn't a very good shot, but I walked outside yesterday and there were two giant clumps of buzzards flying around over the pasture, just soaring. My memory card was acting up and by the time I got it fixed this was the only group close enough to take a picture of. They do that in the spring, for a couple of days the sky will just be full of flocks of them. Last spring, I stood and watched hundreds of them fly over the house for 45 minutes. I have never seen anything like that either. I never knew there were so many. They just kept flying in to come to this place to soar. I thought it must be the warm air that the pasture has right now causing the up and down drafts.The swallows do the same thing in April. Maybe they are courting. 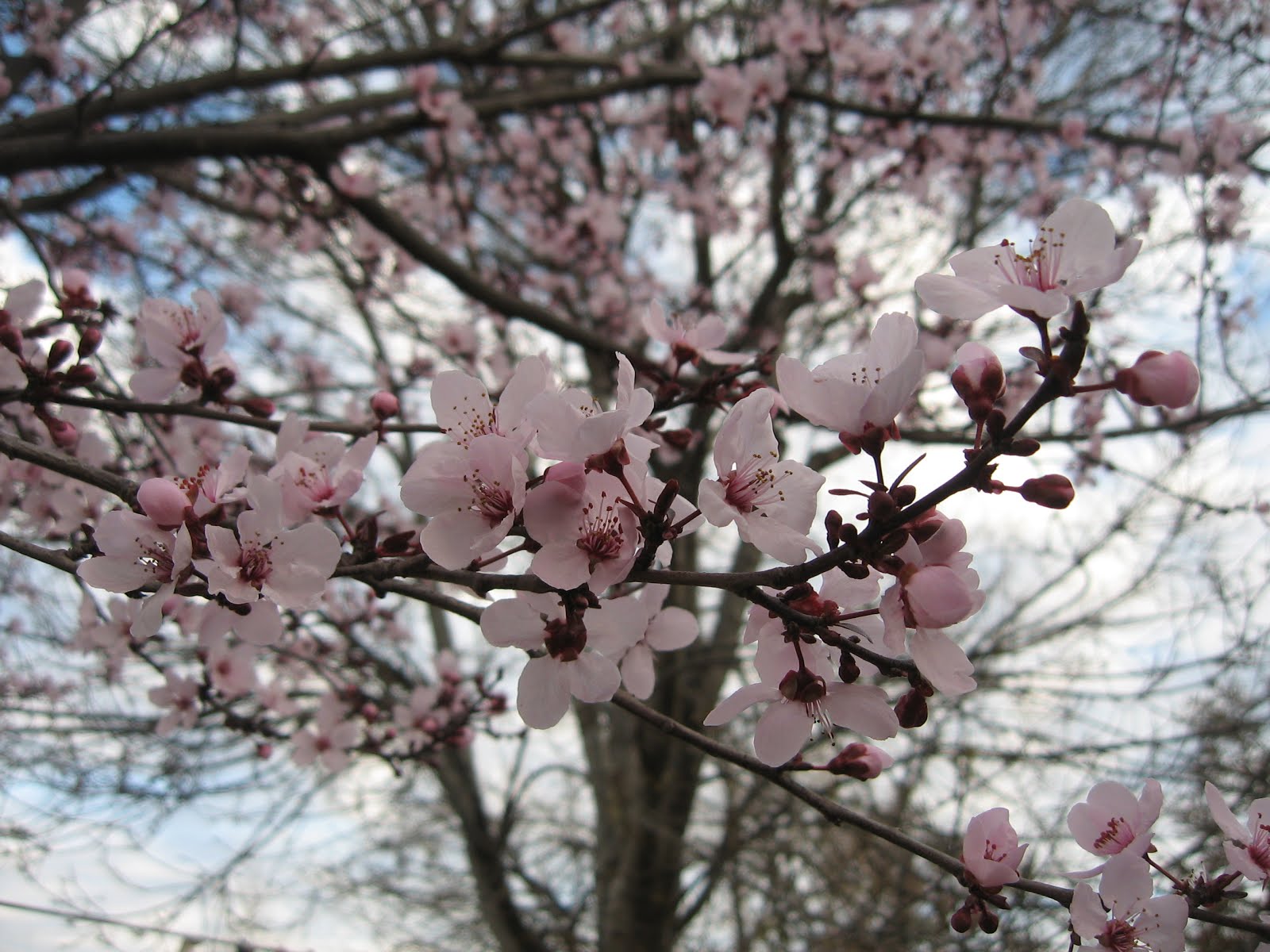 I have been making a birthday present. It will so nice once I am finished, or at least I hope so. Me and sewing with a machine, lets say we are acquainted but aren't real good friends. I will show you a picture once the birthday recipient receives it. I thought yesterday I would be finished. Nope. Now I know it will be a couple more days.
But I have miles and miles to go before I sleep, so I need to get this day going, times a wastin'.

Have a lovely Friday,
~Kim~ 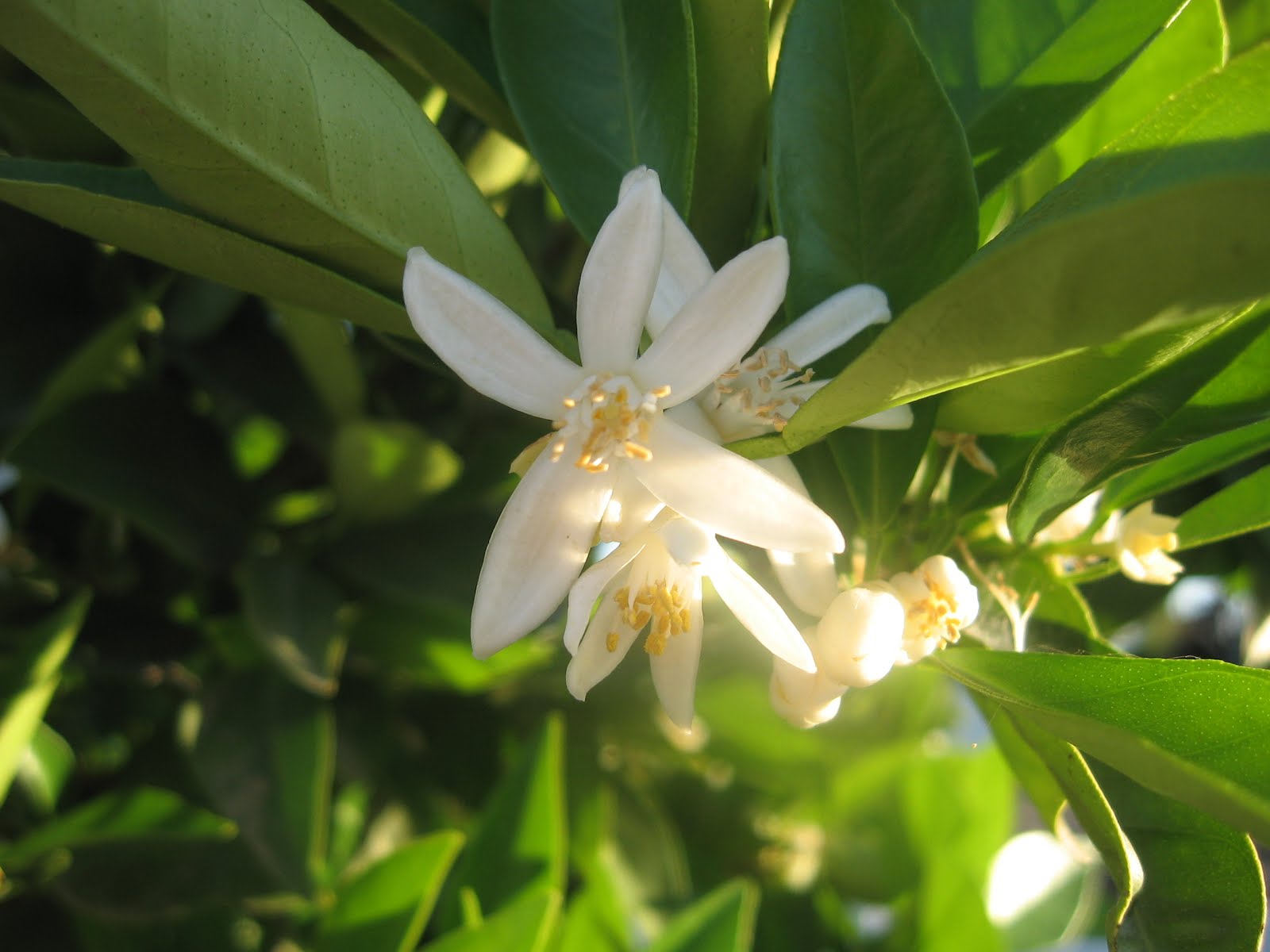 "It is not often that someone comes along who is a true friend and a good writer. Charlotte was both."
---Charlotte's Web, E.B. White, 1952
Posted by Farm Girl at 7:49 AM

Thanks for sharing spring. We know there is hope.

i love seeing the vultures kettling. they just seem happy to be soaring in circles. :) the strawberries look good even if they don't have that extra-sweet flavor right now. :)

Hi Kim! Oh yum! Strawberries on the side of the road? How GREAT! I'm sure they were the cure for the sickies! I bet you're so excited to see your girl!
You'll have a ball!

Your spring pictures are a site for sore eyes....so beautiful....I am sorry your family is sick and I do hope all the strawberries and oranges will bring healthy bodies...

Oh, Kim,don't apologize for posting those wonderful pictures of spring! They are a sight for sore eyes and a weary soul! I sure hope you are all feeling better soon!!

Please don't feel guilty on account we have more snow than we need... some would gladly love to have our snow for winter sports. Me I'm not much into sports, lol...

I really appreciate it when you post fresh photos of your blossoming trees and garden. To me it's a sign that we too will have our garden come to life.

I love your remedy for sick family members. I hope everyone will be well pronto. I think the strawberries are not ripe enough to have developed their full juicy flavor yet. Are they grown locally?

I was feeling unwell for a few days and had to sleep during the day and go to work morning and afternoon. I'm feeling all better now.

I too feel kind of guilty when talking about our weather, lol, but that
's probably because I am usually complaining over something I shouldn't be. It does seem like everybody is sick with that nasty, nasty cold. Somehow hubby and I continue to escape. Maybe it's because we have been eating strawberries every day! Soo good this year for as early as it is. Praying everyone over there is well soon. Enjoy your week-end!

I'm doing tons of laundry and packing, and it was so nice to sit down and read your blog. All the kids have contracted colds. I told them that they have to be well by Sunday. :-p

Those strawberries are beautiful! I think eating them would just have to encourage me to recover! xo Nellie

While we haven't been hit all that hard here in Illinois, it's still definitely winter here ... your photos give me hope that spring is still on her way. ;-) Hope everyone is starting to feel better in your house (and that they don't share with you!!).

More snow pictures on my blog tomorrow, I'm about ready for spring and I don't often say that!! The strawberries look beautiful but they have to taste good as well, sometimes a lil sugar ;)

I can never wait to share the gifts I make on my blog but none of my family read it, except the hubs!!

Love all of your happy Spring-y pictures! It's a great reminder for us snow bound folks, that one day... we'll enjoy blossoms also!

Awesome that you were able to get such lovely strawberries.
Love the picture of the buzzards too; what a neat thing to see.

Hope everyone is feeling better, and that you are enjoying time with visiting family :)

Spring is almost here!!! Keep posting photos and maybe it will come early :-) Hope everyone is feeling better.

Wow, Kim, you can even make buzzards look good.